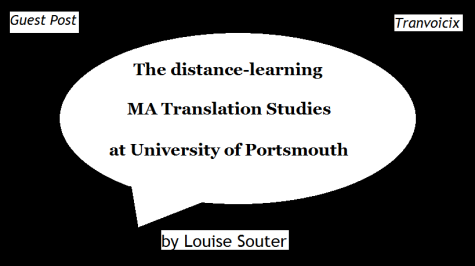 Why I chose to do an MA

I had been working as a translator for several years before I decided to do an MA. I chose to do the course at that point in my career because I felt it would get me more professional recognition. I also wanted to learn more about the translation industry as a whole and people’s experiences within it.

When I did the course, the MA at Portsmouth was made up of 8 units, 5 of which:  Theory and Practice of Translation 1 and 2; Specialised Translation 1 and 2, and the dissertation, were compulsory. The optional courses offered included the chance to do a Translation Project, learn about computer tools for the translator and to do a Specialised Translation Workshop in a second source language. Portsmouth also offered the option of doing a 4-unit Postgraduate Diploma or an 8-unit Postgraduate Certificate. Since I graduated in 2013, the structure of the course has changed slightly. Up-to-date details can be found here.

The course was extremely practical and even though it looked at translation theory, its main focus was on how the theory could be used by translators on a day-to-day basis. My favourite units of the course were the French specialised translation workshops, the Translation Project and Computer and the Translator.

The French specialised translation workshops involved a small group of both French to English and English into French translators working together each week to produce a translation of a 300-word text. The texts covered three different topics such as finance, medicine and journalism during the twelve week course and alternated between English and French texts. At the end of each four-week block we had to submit a translation into our mother tongue for assessment. What I liked about these units was that because we were working with other people to produce translations, we had to think about why we were translating things a certain way and justify our choices. We were also able to pick up tips from each other and learn from each other’s mistakes.

The Translation Project involved thinking about the role of both the translator and project manager in that we had to choose a 5000-word text to translate and then set it up as a project, thinking about how long it would take to translate, how much we would charge, what resources we would need, information we would need from the client, etc. What interested me about this unit was that I had previously only done short translations in a professional capacity and I was forced to think about how to plan a slightly longer job as well as thinking about a translation from the project manager’s point of view.

Computer and the Translator consisted of two projects. The first involved editing a short text to simplify it, translating it using machine translation, editing the translation so it was of a professional standard and analysing the results. For the second project we had to produce a bilingual glossary using concordancers and corpora. Although I already worked with a CAT tool when I took this unit, I wanted to learn more about translation tools and it gave me the opportunity to learn just how useful technology can be for the translator as well as its limitations.

Advantages and disadvantages of distance-learning

I chose to do my MA via distance-learning because I did not want to be tied to one city for three years. However, I was concerned about whether it would be as beneficial as an in-person course. I need not have worried. All the staff were extremely friendly and knew exactly how to put students’ minds at ease about the learning process. Forums were set up for both the MA in general and the individual courses where we could discuss everything from language-specific terminology queries and life as a professional translator to our favourite books. The staff were also very approachable and promptly replied to emails or forum discussions, sharing their vast knowledge of the translation industry.  However, there are some disadvantages to distance-learning; it was not possible to take some of the units offered to students on the in-person course, such as interpreting, nor could we use the university’s computers or CAT tools (unless we lived in Portsmouth).

How the course has helped me in the real world

The main benefit for the MA for me is that I feel more confident in my research skills and my work overall. I also made some excellent contacts within the translation industry and feel more able to explain how the industry works to an outsider.

Louise Souter has been a French and Spanish into English Translator specialising in contracts, finance and tourism for seven years. She is based in Glasgow in the UK. Her interests include travelling and photography. For more information, please see her website and her LinkedIn profile.