The third section of the revision survey switched to focusing on the perceived quality of a revision and satisfaction with a reviser’s job. But it kicked off with asking respondents whether they were aware of the definitions of reviser and revision in the standard ISO 17100:2015, and two thirds are apparently not.

It’s quite simple, really. A revision is the comparison of the source text and the target text (i.e the translation) by a second person, the reviser (and, therefore, revision does not refer to the check the translator makes of his/her own work). Click on the above link for more definitions of terms used in the translation process. I have also written about the differences between revision and proofreading here.

Some respondents were not happy with the next questions because I didn’t provide “don’t know” options. To be honest, if I had, I think most people who answered “no” might have wanted to pick that response, given that “no news” about your translation doesn’t, unfortunately, equate to “good news”. A few clients will just fix the mess translators have created, never breathe a word to them about it and simply strike them off their books. This is not a practice I condone, since revisers sometimes get it wrong too (as I discussed in this post) and the translator should ideally sign off any changes the reviser makes or at the very least be informed of their alleged ineptness.

According to the survey, the vast majority of clients have been satisfied with the revised version of their texts, which is good to know. On the other hand, the larger “no” part of the pie could be inflated by “don’t know” answerers simply plumping for the negative response.

The picture changes, however, when the same question asks how respondents feel after receiving a reviser’s feedback. Translators that will be penalised by an agency for either the nature or number of their mistakes are far more likely to complain than translators working in a collaborative atmosphere with revisers in which they can learn from and mutually support each other and both concentrate on the main goal of the exercise: rendering the source text into the best possible target version to meet or even exceed clients’ expectations and keep them coming back for more.

Interestingly, the final satisfaction question swings completely the other way and, to my mind, seems to contradict the previous two. Although clients and translators are, apparently, quite happy with our revisions (in the respondents’ opinion), the results show that we do not tend to agree with the changes made to our own work. There could be many reasons for this, for example the survey respondents might, on the whole, be expert translators or revisers whose own work is generally revised by incompetents. But I imagine it’s mainly because we find it far easier to dole out criticism than to take it.

Since penalties may be involved if a reviser doesn’t rate your translation highly enough, it’s important to stand your ground if you really haven’t made a mistake. The majority of our respondents have been successful and managed to convince their client that the reviser’s changes were incorrect or unnecessary.

As this question provided an “Other” option for comments, many translators specified that they had only managed to convince their clients some of the time or in part and, in hindsight, I should have provided a “Sometimes” option.

“Not about all the changes.”

“Managed to change back some of the text.”

“Mostly I’ve been unhappy with revisions done by clients themselves on their own, and typically I’ve found out after the fact. I’ve managed to convince one client to backtrack on a decision, but published material can’t be changed without an erratum notice.”

“I made my points but I don’t know whether they were all accepted.”

“Usually it’s a difference in style or whether something is too literal a translation or translated too freely.”

Some mentioned the frustrating situation when a non-native revises your translation and you end up justifying your original choices by giving a grammar lesson.

“There have been times where a non-native has corrected a translation and I’ve had to respond to changes point-by-point.”

“Not always, especially where the reviser was a non-native EN speaker.”

Or you don’t want to upset your immediate superior.

“He was my boss and I was an intern, so I did not dare tell him his spelling was terrible.”

A situation I have been in as both reviser and translator is when the client trusts the former more than the latter.

“I have just let it go in the past because the client trusted the reviser more than me at the time.”

“Sometimes the revision is sent back as a ‘fait accompli’.”

“No, the agency did not contemplate that possibility (of my disagreeing with the reviser’s changes).”

The above is extremely frustrating, especially as the translator usually has a far better understanding of the intricacies of a text than the reviser, but it also underlines why collaboration is essential in revision.

“We sorted it out directly with the reviser.”

“Discussed reviser’s changes (mostly style-related, reviser was not a professional revisor) with the client, who liked my translation better, except for some financial terms (it was a tech whitepaper, and I am not a financial specialist, so the client and I agreed on changing these terms and keeping the rest of the text as I translated it.”

“Sometimes. But this is a two-way issue: sometimes revisers don’t understand that they are “revisers”, not translators. But often, translators don’t accept that their job can be improved and it’s a win-win strategy for everybody, even for them. Because we, as translators learn a lot with revisions.”

“The final product is always consensual, the result of teamwork between the translator and the reviser(s).”

“Proper interaction between the translator and revisor should be sufficient to resolve the issue.”

A few stated that they have a problem with their name appearing as the translator if changes they don’t approve are made to their work.

“Not sure if this counts as the “revision” constituted changes that an author made to their text after I had submitted the translation to the publisher, but the changes included the introduction of out-and-out errors as well as stylistic infelicities. Luckily the publisher sympathized and happily removed my name from the translation.”

“As long as my name doesn’t appear on the work, if they don’t want my suggestions I don’t really care.”

One respondent wrote about a situation that I believe is also quite frequent in our sector. When mistakes in terminology creep in early in ongoing projects, they are often then not only deliberately left but copied for the sake of “consistency”.

“We actually decided to leave them incorrect, it’s an interesting story, they didn’t want to change other “incorrect” docs so changed mine to incorrect to be consistent, even thought they knew they were incorrect—insanity.”

The next approach is one I usually follow as well. To save time and agro, if the changes a reviser makes are acceptable and don’t make the translation worse, it’s much easier to just let it go.

“The changes were ‘only’ unnecessary, not incorrect, did not affect the quality of the end product, so I just left it at that.”

Another option if you’re unhappy with a reviser’s changes is never to work for that client again:

“I don’t usually persist beyond my first substantiated challenge of the review. An honest revision is there for everyone to see and judge, and accept. Therefore, if the client (usually agency) fails to see it an unjust revision, I stop working for that client. It is always best to submit quality work that is clearly ‘quality work’.” 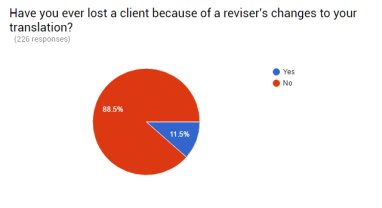 ood to see that the percentage of colleagues who have lost a client because of a reviser’s changes is quite low. And if our profession continues to move towards understanding the importance of collaborative feedback (as explained so well in Allison Wright’s guest post, Revision and the Quality Crate), this figure is likely to drop.

In Part 4 we take a detailed look at the answers respondents gave to the “where have you studied revision and editing techniques” question.

Part 1 of this revision survey results summary focuses on why people like and dislike doing revisions and Part 2 on the financial aspects of revision.

Explore this blog by starting with the categories page, which includes a section on all the surveys I’ve run.