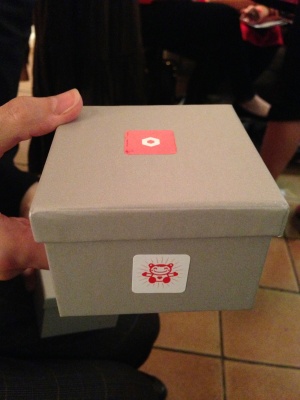 The Freelance what? For the uninitiated, The Freelance Box, or TFB, is a series of half-day, in-person business and marketing courses offered by Valeria Aliperta of Rainy London Translations and Marta Stelmaszak of Want Words.

Although TFB is based in London, it has travelled as far afield as Madrid and Bratislava. The beauty of these events is that they come to you.

Well, in theory they do. Being a rather determined, dedicated and ‘nothing is getting in my way’ kind of girl, I didn’t think anything of hopping on the Glasgow to London train for TFB launch event.

After stumbling around the City trying to get my bearings, I eventually found the venue. Twitter 1 – 0 Google Maps.

The first thing that hit me was the size of the place. I was expecting some kind of imposing office building, but to my surprise, our business and marketing sessions were to take place in the basement of a cutesy cafe and cake shop.

While the décor might not have been to my liking, the cosy, friendly atmosphere that such a venue lent certainly was. Besides, a sofa is a sofa. Who cares if it is pink?

I think it is worth mentioning here that at the time of The Freelance Box launch, I had only ever attended one conference, namely the 2013 ITI Conference just a few months previously.

It was, undoubtedly, a fantastic experience. I left feeling inspired and positive about the industry I had recently joined, but it was all rather overwhelming. Stepping into The Freelance Box space, where there are usually no more than fifteen attendees, I felt much more at ease.

Marta and Val started off by introducing themselves and each presenting a variety of topics related to business, marketing and networking.

Some of the key themes of this event were USP, sales pitch, client avatars, client acquisition and business dos and don’ts.

We were then given handouts with the most important pieces of information and a little box for storing all of our ideas. Just to keep us on our toes, we were set two follow-up assignments to send in by email.

After the presentations, we had the opportunity to put these ideas into practice with group activities. This was the icing on the cake for me, as we received feedback and tips on concepts that had just been discussed, such as our USP. Essentially, it meant that we left with more than just some scribbled notes we might not understand later. True to form, Marta timed these activities so that we were forced to focus – great for all the procrastinators out there.

Being able to talk over some questions about my business with Marta one-on-one was also invaluable.

Would I recommend the course?

Without a doubt. I think this course is suitable for translators and interpreters who are new to the profession as well as those who have been working in the industry for a number of years.

The material we covered at the launch event has helped me in my own marketing and networking, in marketing translations and in copywriting. As a matter of fact, I still have the handouts to this day.

Although you will meet more colleagues at larger events, I felt that the TFB allowed you to build stronger connections with the people you did interact with. In fact, I think I have received just as much, if not more work in terms of referrals from this small event than I have at large-scale conferences.

*At the moment, I’m trying to round up enough Scottish translators and interpreters for a local event!

This guest post is by Julia Graham, a German and French to English translator, copywriter and proofreader who specialises in marketing and technical texts. When she is not translating, you will either find her on her yoga mat, dancing Argentine tango or whipping up a healthy (but usually messy) vegan concoction in the kitchen.

This post was first published on 18/04/2015 on my previous blog. The course is no longer available.